Looking to put 2020 in the rearview mirror as fast as possible? What better way to do that than in a race car? Among the nearly 2500 vehicles at auction this month, including those from Mecum’s Kissimmee sale and the events put on by Worldwide, RM Sotheby’s, Gooding & Co., and Bonhams that would normally all be held live in Arizona, here are our top seven picks. Any one of these race cars would a memorable centerpiece of a motorsports collection.

If you want to burn some gas, make a lot of noise, and intimidate your neighbors, a NASCAR Winston Cup Car checks those boxes with attitude. Mecum is offering this ex-cup car at its Kissimmee Florida event this week. Built by Richard Childress Racing in 1991 as a short track car, it was converted to a Monte Carlo in late 1994, but it doesn’t have much documented race history. However, Dale Earnhardt drove it and wears his iconic #3 livery. That counts for quite a lot—one of his ex-NASCARs sold for $209,000 in 2019.

Since the Ford vs. Ferrari movie, Shelbys have been hot. Everything from Cobras to the Mustang-based GT cars have been selling well. Of course, documentation and history matters when it comes to Shelbys, and Mecum is following up its record sale of the prototype GT350R for $3,850,000 at Indy last year with another GT350R. Chassis SMF5R106 wasn’t a team car, but it was raced in-period and will likely go for one-third of what the prototype sold for last year, or near the condition #1 (Concours) value for the car.

Shelby’s Cobra is arguably the most successful example of putting a high-horsepower American engine into a sporty foreign chassis and going racing, but it wasn’t the first. In 1946, Sydney Allard hit upon the idea of using Ford’s V-8 in his own chassis. Initially using Ford’s 221-cubic-inch flathead, subsequent examples had larger and larger American V-8s. Worldwide is offering this 1952 Allard J2 with a 390-cubic-inch Cadillac V-8 and, while not exactly period-correct, the newer Cadillac engine maintains the spirit of the hold-on-tight performance of the Allard J2s. With the condition #3 (Good) value of the Allard J2 at $173,000, this car won’t likely lose much for non-originality. 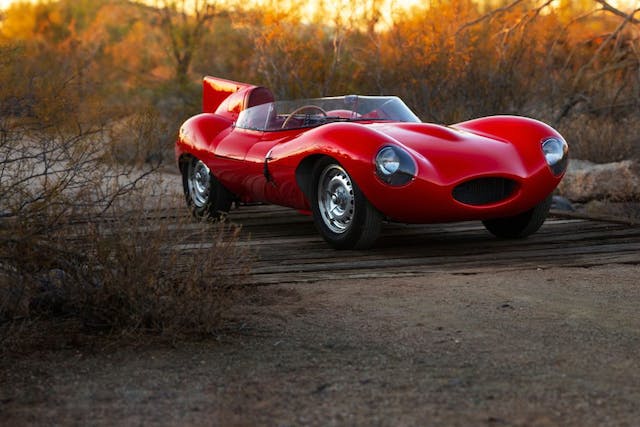 Even though Allards dominated Jaguar’s XK 120 in racing in the late 1940s and early 1950s, its aerodynamics soon caught up with it when Jaguar countered with a much more slippery C-Type. As Jaguar continued to innovate in the 1950s, it saw the opportunity to build an even more aero-friendly shape and use an advanced semi-monocoque chassis. The result was the D-Type, which won Le Mans in 1955, 1956, and 1957. With that competition record, D-Types are worth several million dollars, and some can sell for a lot more with the right history. RM Sotheby’s is offering the 1955 Jaguar D-Type chassis XKD-518 with an estimate of $5,750,000 to $7,500,000. While the car is unusual because of its original red over red combination, it also has a well-documented history, which is important for D-Types.

Not everyone can afford a race car that costs millions, but there are still plenty with solid history that will run you a lot less. Looking a bit like a small Jaguar E-Type, Triumph’s 2.0-liter inline-six-cylinder-equipped fastback GT6 was a steal when new and is still considered a bargain today. The same is true for its racing variants, and Bonhams is offering one campaigned by the Group 44 team in 1969 and 1970. (It won its class in the SCCA national championship in 1969.) Perhaps fittingly given that the Triumph GT6 was intended to be a junior Jaguar E-Type, Group 44 would successfully race a Jaguar E-Type Series III Roadster. With an estimate of $50,000 to $70,000, it is above the condition #1 (Concours) value of $38,000 for a street car, but not by all that much. As a race car it is likely to hold its value; it sold for $55,000 in 2012.

Not everyone wants to worry about keeping their race car in pristine condition, and RM Sotheby’s has just the right car for those people. Offering a 1972 Lancia Fulvia “Fanalino,” this rally car has a hot 1.6-liter V-4 engine driving the front wheels. While the Fulvia didn’t win the World Rally Championship, it did win the series’ predecessor and taught Lancia what it takes to win—lessons it applied successfully with cars like the Stratos, 037, and Delta. This car doesn’t have any period rally history noted, but it was campaigned numerous times in Europe between 2008 and 2014. Now showing some battle scars and rust, the car appears to be ready to enjoy worry-free.

The line between neglect and patina on a race car is at times vague, but sometimes the patina looks right and can make the car worth a lot more than its restored peers. Gooding & Company is offering this 1926 Bugatti Type 37 Grand Prix car chassis 37227 with a healthy amount of patina. Owned by one individual from the mid-1950s up until his passing in 2019, its condition reflects an un-messed-with car that is rare among Bugattis of this era. Forgoing the exotic roller-bearing inline-eight-cylinder engine of the Type 35, this model achieved racing success with a less complicated and more reliable four-cylinder. Values for Grand Prix Bugattis vary widely, from the low six figures to several million dollars depending on the car’s provenance. Chassis 37227 is expected sell in the top half of that range. 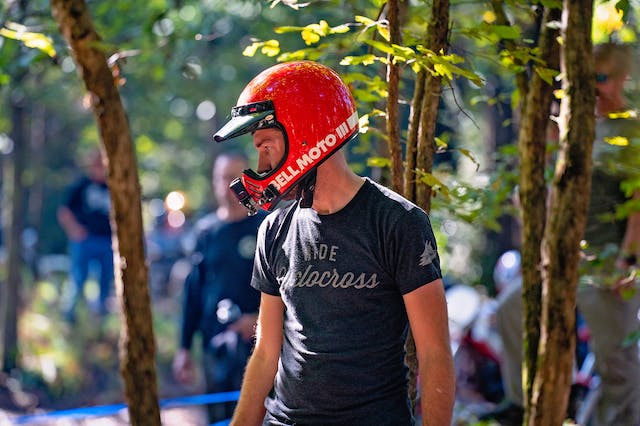