3 key classics to watch at the 2020 Monterey Online auctions

While longtime Pebble Beach-goers can still wear their salmon pants and seersucker at home, it won’t be quite the same experience with the 2020 Monterey auctions taking place online. Cars, however, will continue to change hands, and this year’s roster has some true automotive treasures that will keep us glued to our screens when sale time comes. This year’s results won’t be meaningfully comparable to those of past years given the change in platform and a substantially lower volume of vehicles on sale (less than half versus 2019). Among the three major auctions this August—Gooding & Company, RM Sotheby’s, and Bonhams—we’ve selected three cars that especially pique our interest.

The 928 was a totally clean-sheet Porsche design for 1978, developed to face growing government regulations that made it increasingly difficult and unprofitable to modify the hallowed 911 into compliance. Although purists scoffed at the notion of a front-engine luxury grand touring car with power steering and a water-cooled engine potentially replacing the 911, there was little denying the reality that the 928 was a great car to drive. It was technically advanced compared to the rear-engine veteran, boasting a body made of multiple lightweight materials, a highly refined and fully independent suspension, and a new all-aluminum V-8 engine.

Sales were underwhelming, however, and for a long time the 928 was a cheap Porsche without significant collector cachet. In recent years that reputation has improved, and first-year models hold the strongest values outside the final-series 928 GTS. As a result of the 928’s relatively recent good fortune, there are not many high-dollar, multi-year-restoration examples out there, such as this Silver Metallic offering at Gooding & Company. The desirable five-speed manual is a boon as well—our data shows a 20-percent value penalty for automatic 928s. This car’s restoration started in 2015, and since then the debut-year 928 has increased in value by 182 percent, to $75,000 for examples in top Concours condition. A similar 928 sold for just that much back in January with Bonhams, but this car’s low estimate of $110,000 suggests confidence that this front-engine Porsche is on the verge of a breakout moment.

Following Alfa Romeo’s first post-war success, the 1900, the Giulietta added both power and choice of body style into the mix. The limited-run Sprint Veloce Zagato was a short-tail take on the successful 2+2 coupe by Bertone, and no more than 18 were rebodied in this way before Alfa Romeo decided to produce a factory version of its own, called the Sprint Zagato. The Sprint Veloce Zagato features a 1290-cc four-cylinder with dual Weber carbs, good for 95 hp, mated to a four-speed manual gearbox. Of the original run, this example included in Bonhams’ sale is said to be the only one Zagato fitted with a “double bubble” roof. (The first owner bought a standard Sprint Veloce and competed in a 1957 hillclimb with it, before switching to the double bubble for its increased headroom.)

This car has some notable race history in period, placing first in three 1959 races with the initial owner. Its second owner entered into the 1960 Targa Florio with a new engine and upgraded cooling, and the car would go on to race in several more events through 1961. The Sprint Veloce Zagato was restored in 1997 before being sold to the current owner in 2007 when it received additional restoration.

It’s not at all common for a Zagato-bodied Alfa of this sort to come to auction, so any time one pops up we pay close attention. These Italian beauties are rare, desirable, and most of all eligible for major events like the Mille Miglia. 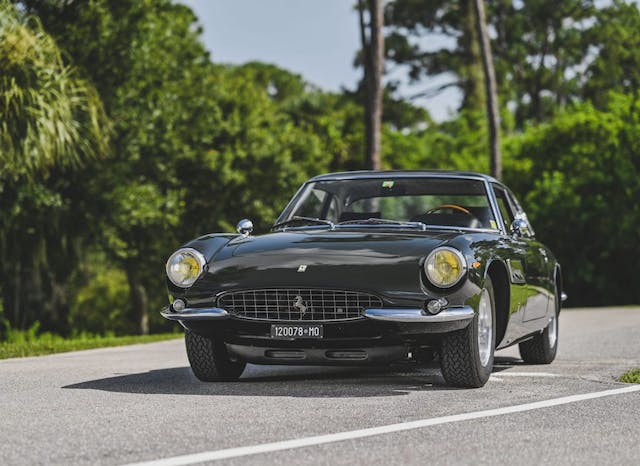 Much more so than the previous two vehicles mentioned here, the ’64 Ferrari 500 Superfast is a top-tier blue-chip collectible. The ultimate iteration of Ferrari’s 400 Superamerica, the 500 Superfast is just about everything you could want in a front-engine grand tourer. The 4.9-liter Tipo V-12 makes a whopping 395 hp and is mated to a factory five-speed transmission. It’s the 11th example of 36 produced, so it’s most certainly rare, as well. For the real Ferrari geeks: this example has several unique elements requested by the original owner. The tweaks include “a longer and lower passenger seat, seatbelts, special positioning for the ashtray and window switches, a Blaupunkt Köln radio with electric antenna, a passenger’s footrest and padded seat cover, and deletion of both the small parcel tray between the seats and the rear Superfast badging,” according to the listing. This car, chassis 6043, last sold in 2009 for €715,000.

While any 500 Superfast sale is significant, it’s particularly worth watching closely in the context of these online sales. Rare, top-condition vehicles of this level do not ordinarily go to auction online, so this Ferrari will be an interesting data point as we study how such sales compare to in-person events.

Get an insurance quote
A Story About
Share Leave comment
Read next Up next: Teenage Aliyyah Koloc breaks European Super Truck 500-meter records