10 unique pieces of auto memorabilia coming to auction this fall

Whether it’s road-trip nostalgia or memories from a special era, car, or motorsports series, automotive memorabilia has long helped accentuate the cars that drive our hobby. You might have a bookshelf full of first editions, 1:43-scale models, or signs perched on your wall; chances are if you like cars, you’ve got a thing or two to remind you about them while you’re not behind the wheel.

Recent auctions have shown that even toys can reach full-size pricing. In September, a Mecum auction of over 600 pedal cars saw 21 of these mini-mobiles sell for over $10,000, including a 1970 Plymouth Road Runner Superbird that sold for $59,000. Signage is another popular bit of memorabilia reaching new heights: In August, a four-foot advertising sign from a short-lived gas company “Musgo Gasoline” sold for $1.5 million (the previous world record for an antique advertising sign was $400,000). That said, automobilia has something for every enthusiast at almost any price point.

If you are interested in getting into the memorabilia game or add to your collection, there are several auctions this fall for you to check out. The upcoming “Passion for the Drive: The Cars of Jim Taylor” by Broad Arrow Auctions presents a wide array of cars, but also includes 499 no-reserve lots of automotive memorabilia up for auction October 14–15. RM Sotheby’s 16th Annual Hershey sale October 5–6 will have 85 lots of memorabilia, Bonhams Audrain Concours Auction September 30 includes 23 lots with 11 more October 9th at the Zoute Sale, and Barrett-Jackson is offering over 60 items in Houston from October 20–22. Christie’s also has some James Bond automobilia at its Sixty Years of James Bond charity sale.

We sifted through a wealth of curiosities at the upcoming sales and highlighted just a small swath of what you’ll find this fall. 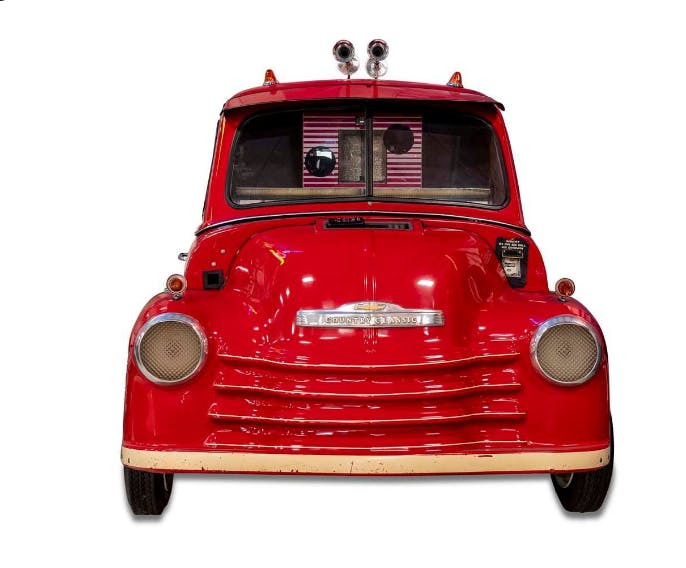 This Carson City CD jukebox made in the 1990s is modeled off a 1947–55 Chevy truck. It holds 100 CDs and has speakers built into the front and back so the truck can sit in the middle of a room. The lights work and flash when the music is playing, and the airhorns on top are actually tweeters. I don’t know any smart speakers that look this good.

This is actually two separate auctions, each for a side of a Ford GT model car. The models are almost 6 feet long, but only 16 inches wide. Both liveries would look amazing hanging on a wall. With the value of 2005–06 Ford GTs nearing half a million, this can be a considerably more affordable way to get a portion of one in your garage. 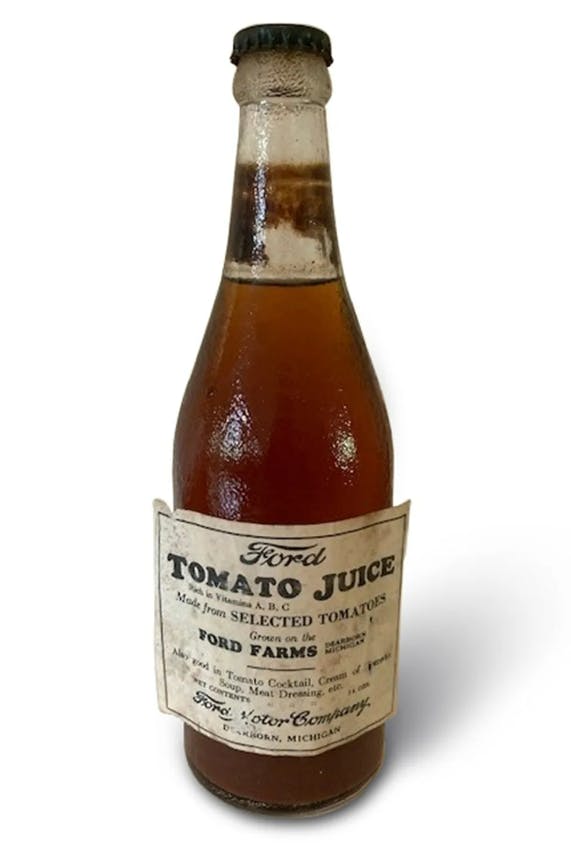 Looking for a gift for a Ford fan that has everything? This is the listing for you. As a farmer himself, and with hundreds of acres around the Dearborn, Michigan plant, it’s not a surprise Henry Ford made use of the land. Stories suggest he let his employees and charities use the land to grew their own produce for free. Ford made a cannery out of a school house on the property in 1938 and, for three short weeks, Ford bottled its own tomato juice. Who knew?

Neon signs go hand in hand with 20th-century car culture. Even if they’re not car-specific, these signs put you back in the driver’s seat as you pass through small-town America. Broad Arrow’s event in October will include 30 different neon signs, including those of traditional beer brands and some gas station displays, but here are a couple that stood out: a 12-foot, porcelain neon Buick sign and a 14-foot, porcelain Pontiac sign. Although not exactly automotive-related, how great would a Dad’s Old Fashioned Root Beer or Tap Room (double-sided) sign look in a garage? For those who like both types of music, country and western, check out this “Honky Tonk sign. 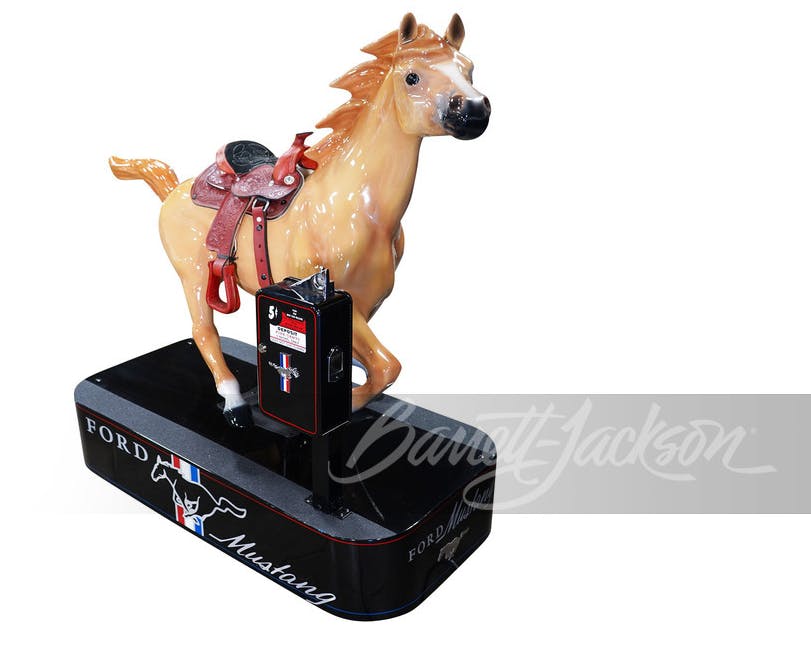 A one-off build for a Ford dealership, this five-foot tall ride plays “Mustang Sally” as you (or your kids) pretend to be a cowboy. It’s surprising Ford didn’t make more of these to entertain kids at dealerships while parents filled out the paperwork on a new car. Winning this auction could be a money maker, though at a mere 5 cents per ride, you might wait a while to recoup your investment.

Sure, it’s not an Aston Martin or a jet boat that 007 drove in the films, but this four-foot-long stunt model did appear in Tomorrow Never Dies when it was powered by an air cannon to launch it off a model car park. Talk about a conversation starter when you show others you own one of double-oh-seven’s “real” cars. 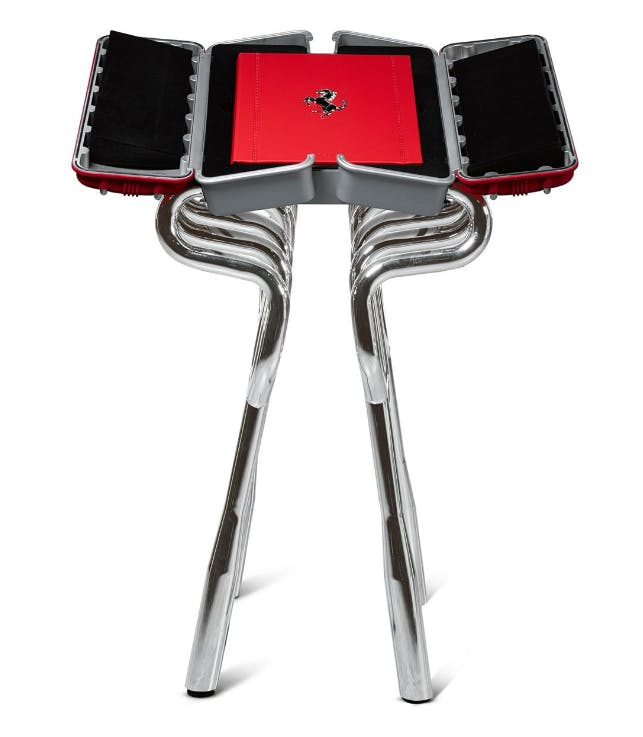 Not only are you getting a limited-edition, numbered and signed Ferrari book; it gets to sit on a beautiful, red-headed V-12 “bookshelf.” This would make quite the nightstand. 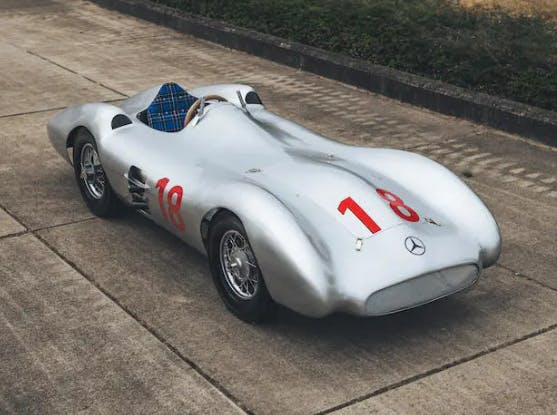 Your kid can be the neighborhood Moss or Fangio in this pint-size 219 Streamliner. Packing a 9-hp, 125cc motor and good for 40 mph, it’s sure to make for quick trips down the block! 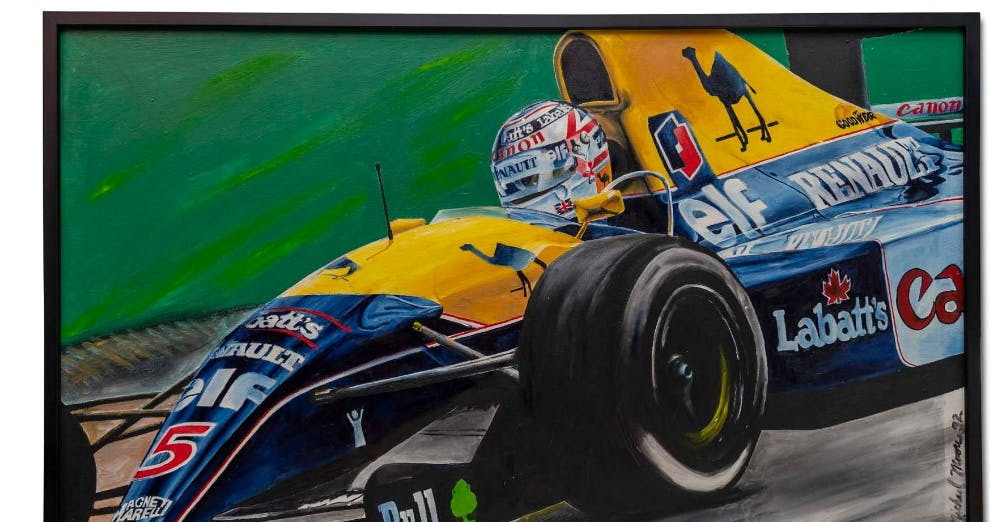 This acrylic painting from 1992 is signed by Michael Moore and features Nigel Mansell’s famous “Red 5” Williams F1 car with Renault/Elf/Camel livery in a 43×25-inch frame. This is the car Mansell used to secure second in points in 1991’s F1 season and finally win his world championship in 1992. 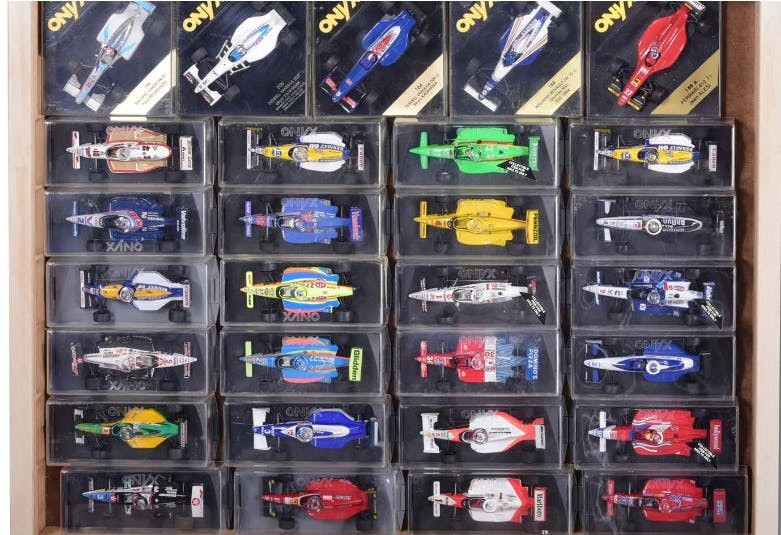 There are a total of five lots of mostly 1:43-scale Indy cars and Formula 1 cars up for auction with some autographed on the case they sit in. Although not listed out, cars from drivers like Mario Andretti, Emerson Fittipaldi, Bobby Rahal, Alex Zanardi, Al Unser Jr., Nigel Mansell, Michael Schumacher, and Ayrton Senna are pictured. With 129 models included between 5 lots, it’s an amazing chance to build an entire collection.

Which of these upcoming auction items may tempt you to make a bid this fall? What type of items are you keeping an eye out for to add to your collection?

Market Trends $51K for a 137-mile Beetle? The last decade in a nutshell
David Zenlea

Get an insurance quote
A Story About
Share Leave comment
Read next Up next: How regulations made the small-pickup segment a dinosaur park

Anyone interested in a 1950’s NGK Ashtray, or an original Corgi Batmobile?