For muscle car fans, the auctions in Scottsdale, Arizona and Kissimmee, Florida that happen each January are all but a required pilgrimage. At least once in a lifetime, you must walk the rows of muscle cars that seem to stretch for miles. Unfortunately for many would-be travelers, 2021 will be a little different. The pandemic has prompted Barrett-Jackson to postpone its event to March, with Russo and Steele following suit. The other auction houses still holding sales will either be operating at reduced capacity or going completely virtual. Fortunately, there are still plenty of muscle cars being offered this January to whet the horsepower-hungry appetite. Of the countless noteworthy muscle cars being offered this month, here are 10 that get our engines revving.

This Camaro doesn’t look like much, but don’t let its subtle appearance fool you. Lurking under the hood is Chevrolet’s fearsome, all-aluminum ZL1 427. These cars were the brainchild of racer and Chevy dealer Fred Gibb. Using the Central Office Production Order (COPO) system, Gibb ordered 50 cars to be built to homologate them for Super Stock racing. An additional 19 cars would later be ordered by other dealers once word spread. Sales were slow, however; the base price of $7200 in 1969 was a major chunk of change.

This Fathom Green example is exceptionally well-optioned for a ZL1, fitted with the durable-yet-pricey M22 “rock crusher” four-speed and spoiler package. This ZL1 also benefits from long-term, known ownership on top of a well-done restoration in the early 1990s. The only downside is the replacement engine, a likely casualty from hard use back in the day. Despite this slight demerit, Mecum estimates that this car could crack the $1 million mark, a milestone that’s only been eclipsed once before with a ZL1 Camaro. Few muscle cars are million-dollar vehicles, and for that fact alone, we’ll be watching this one closely.

Hemi Cuda Convertibles are the dream for muscle car buffs. They are as exclusive as they are powerful, and when it comes to rarity, the ’71 440/six-bbl Cuda Convertible is right up there in both departments with just 17 440/six-bbl convertibles built. 1971 is the year to have, since it’s the last year that Mopar put any sort of real power in its cars. At 385 hp, the 440 was a brute and is considered by most to be faster than the 426 on the street. Being a convertible, though, the 440 is sure to suffer from the unpleasant body flex that the Hemi convertibles are known to exhibit.

Still, the car’s grunt and scarcity yield astounding prices. A 440/six-bbl convertible has reached the estimated $1M–$1.2M range just once before, so we’ll be watching to see whether this one is on the cusp of a new wave of million-dollar muscle cars.

Boss 429 Mustangs are widely considered to be Ford’s top performance car from the muscle car era. The special sauce lies in the bonkers Boss 429 engine. Bred as a race engine for NASCAR racing, the Boss 429 engine needed to be placed in production cars to be legal for competition. Due to the engine’s sheer size (thanks to its massive semi-hemi heads), Ford subcontracted Kar Kraft to alter the cars and perform the engine installation. If Kar Kraft sounds familiar, that’s because the same shop converted the GT40 into the 427-powered brute that won Le Mans in 1966.

Boss 429s were rated at 375 horsepower, but this rating is believed to be very understated. For the Ford collector, a Boss 429 is up there with owning an early GT350 or GT500 in terms of a must-have. Boss 429s come up for sale often, but rarely without reserve and in such great condition as the car shown here. This Boss has a lot going for it. 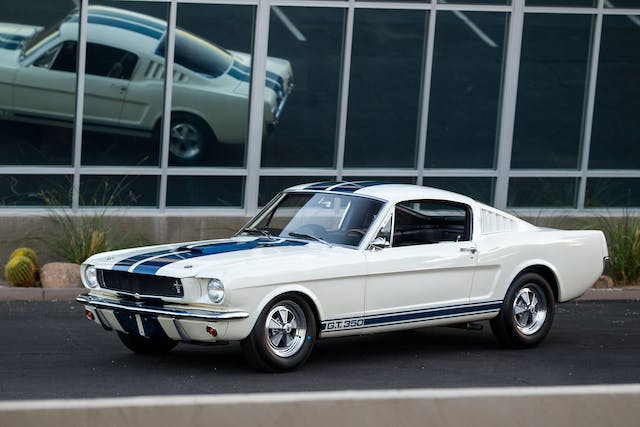 Although perhaps more a sports car than a proper muscle car, a 1965 GT350 is a very big deal for the die-hard Shelby enthusiast. Most agree that they are the tighter and racier-feeling examples among the early GT350s. This one is no. 47 built and was completed in Shelby’s original Venice, California shop—the space where legends like Phil Remington, Ken Miles, and Pete Brock would help forge the Shelby name into the performance juggernaut we know today. Though Shelby American would later move to the LAX airport, the early cars built in the small hot-rod shop in Venice are distinctive and much sought-after by serious Shelby collectors.

The Shelby heading to RM Sotheby’s Scottsdale sale is reported to retain many early GT350 features and has undergone a cosmetic refresh in 2019. This is an extraordinary opportunity to own one of the most recognizable and beloved sports cars in Ford’s history—one with the heart of a muscle machine.

The GTO Judge is one of the wildest cars that Pontiac offered during the muscle car era. The hip graphics and flashy colors are more akin to Mopar’s offerings at the time, not GM’s. Looks aside, the Judge packed an equally impressive punch. The potent Ram Air III produced 366 hp from its 400-cubic-inch engine, and the optional Ram Air IV brought that figure up to 370 horses. Don’t let the four-horsepower difference fool you, though; the Ram Air IV is a completely different animal with better-breathing heads, a more aggressive cam, and stronger rotating assembly.

A standard GTO equipped with a Ram Air IV is a pivotal muscle car for Poncho fans, but a Ram Air IV Judge is one they’d do unspeakable acts to own. This Ram Air IV Judge is just one of 379 Coupes built in 1970, and it has been restored to immaculate condition. With just 64,000 original miles, and wearing its original sheetmetal, this Judge has it all. Some may argue that it would be better finished in Orbit Orange, but that doesn’t take away from this car’s appeal. Ram Air IV Judges are an uncommon find, so expect this one to gain plenty of attention.

Shaking off the bonds of GM’s displacement limits in the 1960s, Chevrolet wasted no time with the 1970 Chevelle in showing everyone who was back in charge. The all-new 454 was a big enough deal on its own, but the real coup de grace came in the form of the 450-hp LS6. Nobody else dared advertise that much power in their street cars at the time, and that dynamic has helped elevate LS6 Chevelles to a near-mythical status among muscle enthusiasts.

This example bound for Kissimmee is of particular interest, given that it is one of the very few LS6 convertibles produced and wears some uncommon equipment. First, it does not have the signature stripes or cowl induction seen on so many Super Sport Chevelles. The spartan theme extends to the interior; the bench seats and basic gauge cluster are not common on such a vehicle. The car’s most surprising feature has to be the more highway-oriented 3.31:1 gear ratio.

This LS6’s ownership is uncommonly well documented from new and includes a previous owner who bought the car for his daughter in 1973 as a graduation present.

The Mercury Cougar may not get as much love from performance freaks as the Mustang does, and it really doesn’t help that Mercury itself emphasized the Cougar’s luxury characteristics. Of course, that does not mean Cougars were in any way sluggish. Case in point: For 1968 a Cougar could maul the competition when equipped with the GT-E package. This performance package included standard front disc brakes, heavy-duty suspension, the Merc-O-Matic transmission, and, most importantly, the fearsome 427-cubic-inch V-8, which packed a tremendous 390-hp punch. Ford wouldn’t advertise this much power in a Mustang until the Terminator Cobra in the early 2000s.

Though Mercury did make the change to a 335-hp 428 in the GT-E towards the end of 1968, few cars were equipped with this less powerful engine. With only 256 GT-Es built with the 427, these are very uncommon and quite desirable among FoMoCo collectors. This one is among the more well-adorned examples: It has the XR-7 package on top of the GT-E option, plus leather seats, European-style toggle switches, a woodgrain dash, and a full set of gauges rather than warning lights.

At no reserve, this GT-E is one to watch—they hardly ever surface for public sale, let alone without reserve.

New for 1970, the Monte Carlo took advantage of the newly introduced G-body platform that GM introduced for 1969 in the Grand Prix. This new layout made for an all-new personal luxury car with a very long hood, formal roof, and a short rear deck. Despite the radical new looks, under the surface the Monte Carlo used the same mechanicals as the Chevelle just with the same length and wheelbase as the station wagon. Fancy looks aside, it shared enough mechanically with the Chevelle that you could order a Monte Carlo with proper Chevelle power. The Monte Carlo could be outfitted with the Super Sport package and powerful LS5 454.

With 360 hp and 500 lb-ft of torque, these cars were absolute brutes in disguise. This Monte Carlo is one of 3823 SS 454s produced in 1970 and displays exceptional condition and correctness, for which it earned an AACA Grand National Senior award. Admittedly, the Monte Carlo is not a car for everyone. It isn’t as flashy as a Chevelle and wasn’t not equipped with the 450-hp LS6 454 from the factory (although at least one dealer-swapped car exists).

Because of these factors, the Monte Carlo is often overlooked by even the most die-hard enthusiasts, and these cars bring phenomenal value for the performance they pack. The most exceptional examples rarely crest $50,000, so it is difficult to beat these cars in the bang-for-buck department. If you’re in the market for a 454-powered Chevy, this one is worth a second look.

Without a shadow of a doubt, the 1970 4-4-2 is one of the prettiest and most powerful muscle machines that Oldsmobile produced. New for 1970 was the massive 455 V-8, offered as a standard item. Since its introduction in 1966, the W-30 package was the standard-bearer of Oldsmobile performance, and that remained true through 1970. The W-30 came equipped with high-flow heads, a more aggressive cam than did the standard 455, and an aluminum intake.

These changes boosted the horsepower figure to 370 and increased torque to a tire-slaying 500 lb-ft. Given that Oldsmobile was an upscale badge, many 4-4-2s came equipped with a TH-400 automatic transmission, but the original owner of this one had the good taste to order it with the M-21 four-speed. W-30 Convertibles are particularly scarce, but with a four-speed, this car is one of only 96 produced. It comes well adorned with bucket seats and rolls on a set of five-spoke SS I wheels. Finished in Aegean Aqua with white stripes, this is a very handsome specimen that any Oldsmobile lover would be lucky to have in their collection.

The Chevelle Super Sport might be best known as a ground-shaking, big-block brute, but when the muscle car craze kicked off in 1964 the Chevelle carried the mighty 327 into the battle. These peppy small-blocks are fantastic all-around performers, but you can’t win an all-out war of cubic inches and horsepower by bringing a knife to a gun fight.

The Chevelle’s saving grace would come midway through 1965 in the form of the all-new 396-cubic-inch big-block. Chevrolet rushed a total of 201 of these 375-hp, Z16-package Chevelles out the door before the close of the 1965 model year. Z16s were not well advertised, so unless you were closely connected with a major dealer, you would’ve been oblivious to the fact that these cars even existed prior to the introduction of the SS 396 in 1966.

While these cars are quite scarce, it is shocking that Mecum is offering two Z16s in succession at the upcoming Kissimmee sale—both in Crocus Yellow. If your collection is missing a Z16 Chevelle, this might be the best opportunity in a long time.