Better coverage built for classics at a price you can afford. 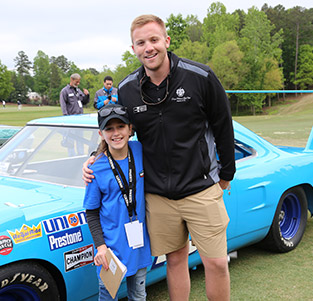 I’m a Regional Territory Manager here at Hagerty, helping to connect people with classic car insurance in North Carolina. I could not have ever imagined in a million years that I would be where I am today, waking up and going to live a dream. I was born and raised in North Carolina and have always had a sweet spot for anything with a motor. I was raised by the coast in Jacksonville, North Carolina, and was always surrounded by cars. I grew up thumbing through old magazines that my dad had kept through the years and even saw some issues that he had when he was a youngster. He and I shared similar taste and I know this because he circled all of his favorites with crayons and permanent marker that still smelled like it could catch on fire!

I started my career with Hagerty in August of 2014 and it has been like a dream since day 1!

What is unique about the hobby in your territory?

That is an easy one. I am based out of Charlotte, North Carolina, and this is the home of one of the most-watched sports in America… NASCAR. Without a doubt, you can see the influence the sport has on the car guys in the area -- whether it’s the cranked up Fords from the Moonshine and Prohibition days (1920-1933,) to the collector that has a piece of a race car from the likes of Bobby Allison and The Alabama Gang, all the way up to the recently retired Jeff Gordon. You can even get a firsthand look at the history by visiting the NASCAR Hall of Fame in downtown Charlotte as well as in Mooresville, North Carolina. Just 27.9 miles north of the town is the North Carolina Auto Racing Hall of Fame as well as the Memory Lane Museum. North Carolina is also host to many of the top restoration shops in the area, whether you need some dings and dent repaired or a complete overhaul and restoration, there is a shop here for you that will exceed your expectations.

I also tend to like cars that need me. To me, cars are like old screen doors. I know that if I jiggle the latch and move it this way, it will open for me and no one else."- Jay Leno, Popular Mechanics Feb. 2000

Why Hagerty? What excites you about what we do?

Quite honestly, I wouldn’t want to be doing this job if I was not with Hagerty. As an Eagle Scout, I was brought up on 12 characteristics that I reflect on in all aspects of my life. A Scout is trustworthy, loyal, helpful, friendly, courteous, kind, obedient, cheerful, thrifty, brave, clean, and reverent. I could relate each of them to the company and the foundation that this organization is built on. The question for me of why, is answered by knowing that no matter who you talk to or where you see a Hagerty employee, he/she will be carrying out their job in a fashion that is at the utmost level of professionalism.

Favorite car event of the year

I could never pick just one… I love the small cruise-ins at the local restaurant during the weeknights as well as one of the largest car gatherings in the world, the Charlotte Auto Fair at the Charlotte Motor Speedway.

Prefer to buy insurance with an agent, at no additional cost? Use our agent finder to connect with an agent in your area.

Keep pace with the collector vehicle hobby. Get up-to-date features, news and tips emailed to you weekly.

What's Your Classic Worth?

The Hagerty Valuation Tools® are provided to help you make informed decisions when buying or selling a classic car.